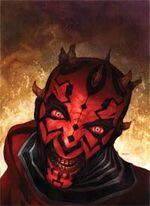 By now the galaxy has learned the terrible truth: Sith Lord Darth Maul still lives. Worse, he has joined forces with his brother Savage Opress!

The Jedi are searching for them and, after Maul and Opress cut a murderous swath through the Outer Rim, so is an army of mercenaries hired by a wealthy mine owner.

Darth Maul has a price on his head, and for him there is only one way to deal with such a problem: go directly to the source! 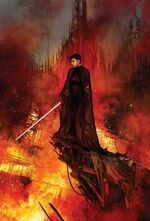 Working with a team of Sith reconnaissance troops searching for a powerful relic, Jedi Knight Kerra Holt is getting a firsthand look at the battles between warring Sith lords. Witnessing all the destruction is making her have second thoughts about her mission, but painful memories push her forward, overriding her conscience. Kerra is falling deeper into the world of the Sith—will she be able to climb out? 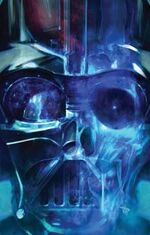 Vader battles the Jedi guard and Trachta wreaks vengeance on a particular prisoner. The Emperor’s condition is stabilized, but they must find a way to combat the uprising back on Coruscant. Vader plans to use the only army available to him—the inmates of the Ghost Prison. But the prisoners have begun to revolt... 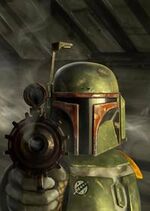 The man behind the murder of Boba Fett has sent his army of mercenaries to kill Fett’s ex-wife and child, and Boba’s half-brother Connor Freeman.

But what if Boba Fett isn’t quite as dead as everyone thinks? Then there might be . . . 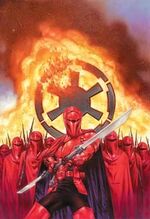 Kir Kanos is the last surviving member of the elite Imperial Guard. He's on the run -- and the Empire will stop at nothing to destroy him! It's the combined might of the Empire against a single man.

One shot was all Falsta got. An instant later his blaster was pointed harmlessly at the ceiling, frozen in place by Chewbacca’s iron grip around both the weapon and the hand holding it.

That should have been the end of it. Falsta should have conceded defeat, surrendered his blaster, and walked out of the cantina, a little humiliated but still alive.

But Falsta had never been the type to concede anything. Even as he blinked furiously at the ale still running down into his eyes, his left hand jabbed like a knife inside his jacket and emerged with a small hold-out blaster. He was in the process of lining up the weapon when Han shot him under the table. Falsta fell forward, his right arm still raised in Chewbacca’s grip, his hold-out blaster clattering across the tabletop before it came to a halt. Chewbacca held that pose another moment, then lowered Falsta’s arm to the table, deftly removing the blaster from the dead man’s hand as he did so.

For a half dozen seconds Han didn’t move, gripping his blaster under the table, his eyes darting around the cantina. The place had gone quiet, with practically every eye now focused on him. As far as he could tell no one had drawn a weapon, but most of the patrons at the nearest tables had their hands on or near their holsters.

Chewbacca rumbled a warning. “You all saw it,” Han called, though he doubted more than a few of them actually had. “He shot first.”

“I am Mander Zuma,” Mander said in Huttese, “If you are Mika the Hutt, I should tell you that your father is concerned.” “I am Mika Anjilliac,” said the young Hutt in educated, precise Basic. “My father has every right to have been concerned. Welcome to ground zero for the Endregaad plague.”

Our story will follow the highly anticipated return of Darth Maul--the infamous villain of Episode I: The Phantom Menace--whose popularity rivals that of Boba Fett. When Darth Maul reunites with his brother, Savage Opress, can even Obi-Wan Kenobi stop him before he rallies the criminal underworld to his cause?

Waiting on details from LucasFilms regarding Season 5, but the novel will feature the highly anticipated return of Darth Maul, the villain of Episode I's Phantom Menace, whose popularity rivals that of Boba Fett.