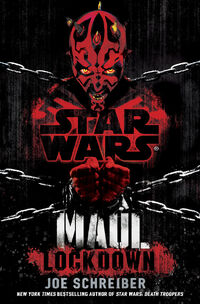 He was still swinging it down when the blade arced sideways, looping back on itself. Maul saw it slash around like the tail of a scorpion, something alive and venomous, hooking through Smight’s face and carving it cleanly in half, then jerking sideways. The guard didn’t have time to scream. His right arm hit the floor, the red blade still flicking and leaping erratically from his limp fingers, chopping what remained of Smight’s body to pieces before it finally crackled and died out in a spreading lake of dark arterial blood.

They all took a step back from what remained of the corpse. Coyle mumbled something under his breath. Zero was staring at the malfunctioning lightsaber, his face unreadable. Slipher looked as if he was going to be sick.

“Well.” Maul nodded at the synthetic lightsaber. “Mr. Radique won’t be pleased with that.”

With a grunt, Zero brandished the blaster rifle he’d picked up earlier. “Forget that. We don’t need it to kill you.”

“I could help you with your problem,” Maul said.

Slipher was watching him very closely now, alternating glances between him and Zero. “How?”

“When I was a mercenary, I assassinated a Jedi once,” Maul said. “It gave me the opportunity to study his lightsaber closely, to disassemble it. I was able to reverse-engineer the components themselves, to study its design. I could fix what’s wrong with these.”